Money, Trash, and some Problems

Originally from the Wall Street Journal:

Problem one: Governments from the U.S. to Egypt to Japan are running big, unsustainable budget deficits.

A new study says that reducing energy subsidies would help governments around the world cut budget deficits and go a long way toward heading off climate change. David Wessel takes a look.

Problem two: Global governments are finding it tough to agree on an efficient, fair way to head off climate change.

Fact one: Those governments spend hundreds of billions of dollars a year subsidizing energy.

Fact two: Curtailing those subsidies would help solve problems one and two.

So why do so many governments still subsidize energy so much? Because their populations are hooked on subsidies and don’t grasp their downsides, energy producers and other vested interests defend them, and because they are seen, incorrectly, as primarily helping the poor. 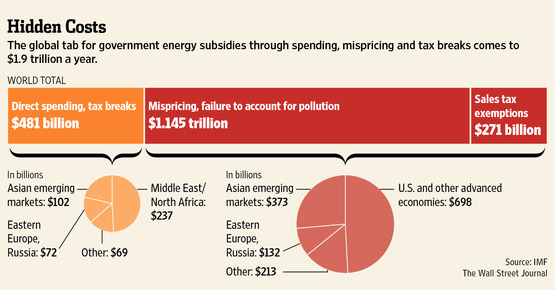 Other than that, there is nothing wrong with them.

The most obvious way that governments subsidize energy is by charging households and businesses less than it costs to produce and distribute gasoline, cooking fuel and electricity. Taxpayers, now or later, pick up the tab. The IMF says these subsidies added up to $481 billion in 2011. Globally, this amounts to 2% of government revenues, but about 22% of revenues in the Middle East and North Africa.

Some authoritarian governments (think Mubarak’s Egypt when he was in power) buy off the population by making fuel and bread cheap. Some oil-rich governments (gasoline costs around 45 cents a gallon in Saudi Arabia) keep fuel prices low to keep the population from demanding a share of oil profits. That may seem harmless, but it isn’t. In too many poor countries, governments spend more subsidizing energy than they do on education or health. Globally, holding down energy prices increases consumption of fossil fuels.

Eliminating those direct subsidies, the IMF estimates, would reduce energy consumption enough to bring the world one-fourth of the way toward the goals set at the climate-change conference in Copenhagen in 2009.

That’s only part of the story. Many countries exempt energy from their value-added (or sales) taxes. And in most, the price of energy set by the government or the market fails to reflect the side effects of its use—traffic, pollution and climate change. This underpricing of energy amounts to about $1.41 trillion a year, the IMF estimates, mostly in big countries that consume lots of energy.

“The question is whether a country should choose to let someone buy something for $1 when the total cost—both of producing it and the costs imposed on society—are $1.25,” says David Lipton, the IMF’s No 2. He thinks not.

This isn’t a new quest for Mr. Lipton. As an Obama aide, he was a behind-the-scenes player at the Group of 20 summit of major economies in Pittsburgh in 2009 at which leaders vowed “to phase out…over the medium term inefficient fossil-fuel subsidies” because they “encourage wasteful consumption, reduce our energy security, impede investment in clean energy sources and undermine efforts to deal with the threat of climate change.”

Four years later, not a whole lot has changed. One reason is that keeping energy prices down is defended as primarily helping the poor. But the IMF says the richest fifth of households in low- and middle-income countries, garner six times the energy subsidies as the poorest fifth. 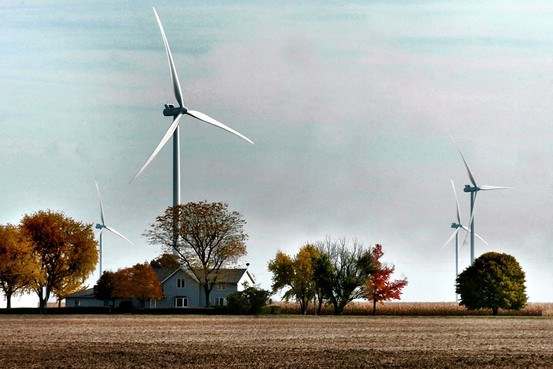 Developers of these turbines in Ohio say harnessing wind energy depends in part on government incentives.

The domestic politics of curtailing energy subsidies are treacherous. The public doesn’t understand them and doesn’t trust government promises to protect the poor and middle class when it seeks to curtail them. Companies that enjoy subsidies don’t surrender them quietly.

The IMF says, hopefully, the politics are navigable. It has assembled two-dozen case studies—some successful, some not—to show the way. In Iran, usually not held up as a model of anything good, higher fuel prices were offset by cash transfers to consumers’ bank accounts paid in advance. In Mauritania, a 2008 reform failed and contributed to a coup. A more gradual effort in 2011, with more care taken to strengthen the social safety net, was successful.